We all know that buying a washing machine should not be taken lightly considering how big of an investment it is. You have to consider the brand you’re buying in terms of not only the initial price but also the cost of possible repairs later on. One of the most trusted brands that offer flexibility in both areas is Bosch.

Bosch washing machines are among the most trusted household brands. They offer reasonable prices at great quality. They might not be as mainstream as others but they’re definitely growing more and more popular due to their superb products.

Ask About a Different Service It might not be a major issue to some but there are others who’d benefit from a washing machine that’s much quieter than others in the market. Bosch washing machines uses this technology to address the issues commonly found in front-loading washers. Yes, we know. They’re quite loud, aren’t they? Instead of using carbon brushes, Bosch innovated and utilises magnets so it won’t sound like you’re grinding metals when it’s spinning. Another technology that they’ve focused on minimising the noise during use is the AntiVibration side walls.

This technology automatically adjusts the power, water, and detergent according to the amount of laundry to be washed. Now, we don’t have to tell you why this is so useful. You no longer need the full load just to make the most out of every cycle.

We know that there are so many people out there who’d want to see such features in all of their washing machines. Bosch got you. The water temperature can go up to 170 to 190°C which is enough to eliminate most common bacteria left in clothes. 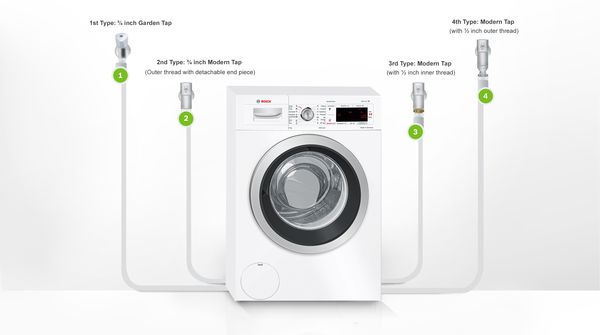 Many users of this brand have attested to the durability of their models. It’s also been praised for its sleek design. Some even claim that it requires less repair and maintenance than other brands. However, there are complaints in terms of the washer not heating or not draining. In some cases, the tub isn’t spinning. As opposed to the company’s claims that it has taken the noise it produces quite seriously, there have still been complaints about the drum making uncomfortable noises. In the worst case scenarios, the motor isn’t running.

We can say that these problems are not unique to Bosch as many brands also encounter them. What we suggest is you approach a trusted technician. Our experts at SG Washing Machine Repair are experienced in handling Bosch models. All you need to do is fill out the contact form so we can set a schedule.

Not happy with our service? Don’t worry. We got your back! Our satisfaction guarantee will make sure that you get nothing but your money’s worth.

No need to jump from one place to another. We are a one-stop shop for everything washing machine-related, from minor tweaking to significant repairs.

What we love more than you giving us a call is setting a consultation where we hear about your concerns. Of course, it’s free. We might even throw in a piece of advice or two.

Get A Free Consultation & Estimate